Religion in the Marvel and DC universes

So, the wonderful and talented Wizera has decided to enter the internet blogosphere, and her post about modern-day depictions of the Olympian underworld as a Hell-equivalent reminded me of how weird the Marvel and DC universes are, where religion is concerned.

For example, in the Marvel universe, you've got the Norse and Greek pantheons, who have their own afterlives (Hel running Valhalla, Pluto running the Olympian underworld) and own special cosmology. At the same time, there is also a group called the Eternals who are clearly the basis of many of the Marvel universe's legends (and, by extension, ours) who were created by a group of alien intelligences called the Celestials who exist on a cosmological plane with a lot of other vague cosmically powered beings such as the In-Betweener, the Beyonder, the Watcher, and Galactus.*

See, he's a Norse demi-god fighting the forces of Hell with a machine gun.
Makes perfect sense, right?
On top of that, there are various supernatural planes, deities and forces such as Nightmare, Dormamu, Cyttorak (which is a dimension as well as a god, I believe), and the Darkforce/Living Light duality. These have frequently been shown as capable of interacting with both the mythological gods and the cosmic forces.

And there is still a Judeo-Christian cosmology and afterlife, since, for example, Doctor Doom's mother is a gypsy trapped in Hell who he frequently tried to rescue**. These afterlives might co-exist/be the same aspect of the occasional place-holder concepts meant to avoid literally saying the words Hell and/or God, etc in a mainstream publication aimed at kids. So, therefore, you have characters like Mephisto (who is clearly the Devil) at the same time as having a character whose name is Son of Satan who is the son of the actual (Judeo-Christian) Satan.*** 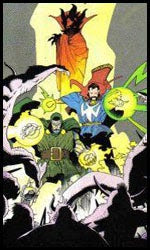 Bet you didn't know you could defeat the Devil if you just combined science & sorcery!
Now, this kind of confusion is not intentional. A lot of the problem goes back to the fact, originally, that a lot of these comics were written in an age where Judeo-Christianity was assumed to be practiced by most people in America WHILE, at the same time, it was considered offensive or improper for low culture especially to name or reference religion. And more importantly, a lot of these characters were supposed to be aimed at kids or teenagers, and very few people want a young person's religious education to be from a SILVER SURFER comic (though whether their normal religious education is actually any better thought out or put-together than a given SILVER SURFER comic is a question rarely asked.) See, you can trust him because he's definitely not the Devil. Definitely not.
But around the end of the 1960s/beginning of the 1970s, some writers and artists started wanting to explore the morality of comics with some level of complexity. At the same time, the Comics Code Authority started lifting some of the bans they'd had on supernatural characters, which led creators to stretch their boundaries some more.

At the same time, however, comic fans had matured. They'd grown up with characters who got their powers from Heck or fought the powers of Hades. And while they wanted to see their characters get more complex, the morality of the characters get more nuanced and adult, they also believed in the sanctity of the stories that came before.

So, while still toeing a Judeo-Christian line (as that's the ethic that pervades Western superhero comics, so that even Supergirl, after being erased by a cosmic meta-fictional entity, could show up and tell a ghost created by a pseudo-Hindu god what the meaning of Christmas was...) 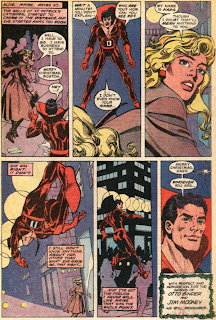 They really couldn't have timed this for Makar Sankrati instead?
Both DC and Marvel have quietly become polytheistic universes, without quite admitting or understanding it. It's like how pagan gods got co-opted by early Catholics, transformed into non-canonical saints and martyrs, or how even real saints took the place of sprites/demons/fairies/household gods in the minds of the medieval peasantry.

But hey, as a result, we can have comics where a magician gets almost killed by Satan's bastard son and then learns the secrets of the Druids from some Tibetan lamas.  So there's that.

* OTOH, Galactus was supposed to be from some sort of higher plane of existence, which was destroyed by entropy, and was transformed by the shift in planes. So he actually does have a start and end date, being co-terminal with the Marvel universe instead of preceding it. And if any of you have ever read anything of Medieval philosophy and theology, you know why that's a big deal.
** For those of you new to this aspect of Dr. Doom, his mother ending up in hell had more to do with an actual deal with the devil rather than some sort of high-handed "how dare you not go to the right church" kind of thing.
*** Yes. He was a superhero in spandex and a cape, who fought evil with powers he got from being the son of the Devil. Which has to be the worst superhero origin story ever.
Posted by Mr. K at 11:09 PM 1 comment: