"Christianity is stupid! Communism is good!": IF FOOTMEN TIRE YOU, WHAT WILL HORSES DO?

If Footmen Tire You, What Will Horses Do? (1971)
Directed by Ron Ormond
Based on the writings of Estus W. Pirkle
Starring Judy Creech, Cecil Scaife, and Gene McFall

While Ron Ormond might not be as famous as Ed Wood or Herschell Gordon Lewis, he occupies a very curious place among schlock auteurs. A hacky B-movie director in the 50s, Mr. Ormond found religion and decided to devote his "talents", such as they were to spreading the word of Jesus Christ, specifically as preached by Reverend Estus W. Pirkle. Of course, Ormond's talents did not improve despite his conversion, and, in conjunction with the very "fire and brimstone" preachings of Reverend Pirkle, produced some very odd movies aimed at the religious "market", to be shown on 16mm projectors at churches. The best way to describe If Footmen Tire You, is to imagine if Red Dawn were being done as a Christmas pageant by your local Baptist church, and the whole thing were directed by Ed Wood.

The first thing that might strike the viewer as odd is the year given as the release date: 1971. But with the exception of brief mentions of inner-city riots and campus protests (and one hilariously out-of-touch "sex education" scene), this might as well be a colorized version of INVASION USA (the 1952 propaganda film, not the 1985 Chuck Norris action film). Most of Pirkle's broadsides against youth culture are so vague, and Ormond's dramatizations so clueless, that they could be criticizing beatniks or rockers in the 1950s. And the gore effects (and yes, there are gore effects) could have come out of BLOOD FEAST... caro syrup drenched over "dead" people who are clearly still breathing.

The story, as much as there is one, is that Reverend Pirkle is giving a sermon to his flock one Sunday. Judy (played by Judy Creech), a rebellious teenager, comes to mass and realizes that her dead mother was right about believing in Jesus. And every so often, Ormond cuts away to dramatize Pirkle's vision of Communist-controlled America.

If this film has any cultural currency outside of a select film buff community, it is as the source of the sample for experimental rock group Negativland's track "Christianity is Stupid" (which is also the source of the post title). There is something absurdly thrilling about hearing a Southern Baptist preacher, in stentorian tones, yelling, "Christianity is stupid! Communism is good!" over and over again. And, if this movie has any value beyond historical footnote to Christian pop culture & exploitation cinema, it is the absurdity of a evangelical sermon that tries to scare the congregation with misunderstood facts and half-remembered anecdotes about the counter-culture and Communist countries.

On the most basic level, the movie fails because its image of a Communist take-over and its consequences are so absurd. While Pirkle, at several points, buttresses his arguments with claims that these events are inspired by true events that happened in Russia, China, and Vietnam, but without understanding the context or widespread nature of these events. Pirkle only talks about Christian persecution, but he doesn't say anything about the state-sanctioned persecution of other religious minorities, ethnic minorities, intellectuals, artists or business owners, or the starvation of millions of peasants in the name of industrialization.

Furthermore, Pirkle's vision of a Communist take-over, while barely believable in 1952, is absurd in 1971. He shies away from specifics, but the few hints he drops are big enough whoppers. He anticipates a 5th Column-esque takeover, claiming that within 15 minutes of a signal, a legion of shadowy Communists will murder the President, Congress and most state governors. Even Joseph McCarthy would have blanched at that claim!

Remember, this movie was released seven (!) years after DOCTOR STRANGELOVE,  but there is no discussion of a nuclear war of any extent. Pirkle envisions a Fifth Column takeover, which results in total subjugation of the U.S. by Communist Cuba!

That's right, not China, not Russia.

If Ormond was a good director, this movie would be offensive. But since he's a schlock auteur, it's hilarious.

Except for the occasional Pirkle whopper, the sermonizing is pretty static and dull. Even the extras playing congregation, which one would assume might include members of Pirkle's own congregation, look bored and on the verge of yawning throughout the film.

Where the film comes alive is in the flashbacks to Judy's (inoffensively) rebellious life and the flash-forwards (or visualizations) of the aftermath of the Communist takeover. Judy's scenes with her mother and un-named boyfriend are hilarious: watching Judy & her mother woodenly over-emote in each other's general direction as they deliver awkward dialogue is a delight, as is Ormond's depiction of Judy's whitebread rebellion, as she and Mr. Boyfriend drink beer and smoke cigarettes!'

But even better than that are the torments the Communists devise. They sound pretty gruesome:

- Soldiers sticking nails through the ears of children;
- Soldiers forcing children to lower their father onto a series of rakes stuck into the ground;
- A boy getting his head chopped off with a machete after refusing to step on a picture of Jesus.

But when all the depictions are as inept as the one below...

Next they made him wear a headband with an arrow on other side.

Well, you can't help but laugh.

Adding to the hilarious incompetence is the fact that all the Communists wear costumes that were made by a high school theatre department that can't do a hammer-and-sickle, while the actors playing the Commisar (Cecil Scaife) and the Deputy Commisar (Gene McFall) seesaw between a broad Russian accent and a Deep Southern accent, sometimes within the same word!


Oh, and the Commisar looks like he should be coaching the Sweathogs. 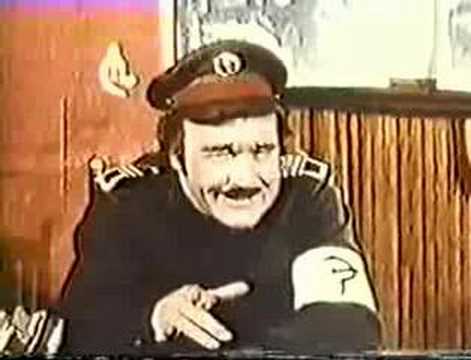 If you're someone who actually suffered under Soviet totalitarianism, this movie would make you want to pound nails into the makers' eardrums. But if you think evangelical Christianity and fear-mongering are absurd, well, this movie might prove rewarding.

So some friends of mine (the amazingly talented Katie Hall & her fiancee Travis Goodman) shot a sketch I wrote for them. I've worked with Katie before through my college's alumni association, and she & Travis did a good job bringing this to life.

Oh, and stay tuned after the credits for some hilarious out-takes.
Posted by Mr. K at 11:37 AM 1 comment: