If there is one silver lining to wearying but banal illnesses like a cold or the flu, it is the way they justify catching up on one's movie viewing, especially lightweight cinematic confections. I might not be interested in watching Salo right now, but something like Modesty Blaise or a giallo or a minor '40's b-movie is right up my alley.

And Modesty Blaise is good. Not great, but definitely good. From the buzz (or lack of it), I expected to find something like the atrocious 1967 version of Casino Royale. Instead, it could sit comfortably alongside Mario Bava's Danger: Diabolik. Just like Bava's film, MB is a comic book caper that is definitely more style than substance, but that style...

Whoah, thanks to everyone who checked out my post on Hangmen Also Die! as part of the For the Love of Film Noir Blog-a-thon.

I've got some follow-up posts in the works, but I spent last week in Chicago, and this week was spent with me drained by the twin demons of poor health and day jobs.

But on the positive side, I've now got a blu-ray player that is Wi-Fi enabled, so I'll be watching Netflix even more easily now. And I also ordered Warner Archive's version of The Outfit, so hopefully a review of that will be up soon.

In the meantime, I recommend my cinephile friends check out Walter Hill's little-remembered Extreme Prejudice (1987). Scripted by John Milius, starring Powers Boothe, Nick Nolte, Rip Torn, Clancy Brown, William Forsythe and Michael Ironsides, it really deserves to be better remembered. It's a very strange and uneven film, but it hangs together much better than you'd expect. It really strikes a fascinating balancing act between neo-western and action-thriller, with the tension between the two genres serving as a thematic emphasis on the way the American spirit/character has changed. 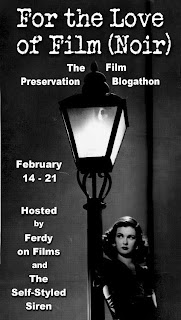 A while back, the talented David Cairns posted an excellent tribute to the obscure noir/WWII film THE DEVIL STRIKES AT NIGHT by the German transplant/film director Robert Siodmak. It's an amazing reversal of audience sentiment, drawing us in with a traditional procedural, then reversing our sympathies and expectations by having the procedural aspects conducted by the Gestapo. It ends up being a damning condemnation of Nazi Germany because of the way even the most normal and necessary elements of civilization get perverted in the name of racist ideology and a refusal to confess weakness.

By the end of Hangmen Also Die! (one of two Hollywood efforts to dramatize the assassination of Reinhard Heydrich) Lang's direction and Brecht's script accomplishes a similar feat. Instead of perversely wishing that the Gestapo actually succeed in their goal of catching a man, I find myself sympathizing with a Nazi collaborator and traitor who is being pursued and prosecuted for a crime he never committed. Even though this man is complicit in the regime's crimes, we see the ways in which an ideologically corrupt government ends up obliterating the one man who should offer them no threat.

Some credit should also go to Gene Lockhart, who portrays his Quisling brewer Emil Czaka in a way that makes us despise him when he is riding high on the Nazi bandwagon, but whose very childish selfishness makes him pitiful when the world stops making sense. He's certainly evil and we want him punished, but, like Kafka's narrator in The Trial, we remember that feeling of guilt and the worry that whatever we're being punished for, it's for that crime that no one knows.

The complicated element, however, is that this is the thing that sticks with us at the end, the Quisling, the monster, being hunted down by his own kind, reality turned against him.

There certainly are a lot of intentional echoes of M in the end.
[ Sidenote: Record shows that Brecht was quite dissatisfied with this film, the only film project of his Hollywood years to reach completion. He felt that the script was watered down and the film was buried. Certainly the imbalanced nature of the film suggests he was right. On the other hand, Brecht the theorist often contradicted the results of Brecht the author. We need merely look at Mother Courage and Her Children for an example of how they disagree. The theorist thinks Mother Courage is a ridiculous, even monstrous figure at the end of the play, but the author has created someone we pity and admire.

Looking at the picture as a piece of the Brecht canon, there certainly are a lot of elements that strike me as Brechtian. Ideologically, the film is obsessed with the importance of mutual cooperation and, more importantly, the way the needs of the many outweigh the desires and petty moralities of the few. Again and again, a character is forced to embrace a behavior that is normally wrong, such as Nasha faking unfaithfulness or Svodoba refusing to take responsibility for his actions, because of the greater need of the group.

Also, there is a keen insight into the way groups and hierarchies function that represent the Brechtian fascination with the street scene. The opening, in which a crowd of industrialists and bureaucrats argue as they wait for the Reichsprotector, for example, highlights the contradictory impulses and desires of the toadies in the corporatist fascist state in an efficient and telling way. The same in a street scene where Anna Lee's attempts to reach Gestapo headquarters is discussed by the community, which then bands together to ostracize her.]

That's not to say that the rest of the film is bad or uninteresting. Fritz Lang is directing with James Wong Howe as his DP! The whole film plays out in a real world played by people so varied and homely in appearance (even our leads, when they are good-looking, are of boys and girls next door type) that even the smallest part is given the lived-in feel of a sketch or a woodcut.

And there really is an amazing visual eye and design sense to the film, like in a Gestapo investigator's office that is filled with clearly looted furniture and art mingled with shabby office furniture, or a horrifying series of sequences in Gestapo headquarters that pave the way for Orwell's description of similar spaces in 1984. One of several arresting images from the Gestapo HQ sequence.
(Image courtesy of DVDTalk)
There's so much to talk about here, from the daring and effective decision to have the Germans speak in German while the Czechs speak English, to the weird sense of dissonance brought on by Walter Brennan pretending to be an intellectual European when you want him to be croaking at John Wayne, to the way that Alexander Granach's Gestapo officer comes off as a perverse, sadistic but compelling version of Hercule Poirot.

But I'd rather encourage you to watch the film yourself and come back and leave your thoughts in the comments. It really is an amazing, under-rated film that deserves further exposure.

This blog post is part of the For the Love of Film (Noir) Blog-A-Thon, which is raising money to restore the influential but obscure noir The Sound of Fury. If you are interested in donating to this important cause, click here.

but why does everything I've ever heard about it focuses on the lyricism and ignores the dark humor pervading it? I don't see how you can hear Spacek's narration and not read into it some irony (on the behalf of the film, not of Spacek's character).

Also, it would make an interesting companion piece to the Coen Brothers' True Grit. Both feature female leads and narrators who are introduced into a world of violence starting with the murder of their father, then find themselves being dragged along by older men. And at the end, their efforts feel empty and leave them marked. The visual tone of the films is also similar, elegiac and beautiful while showing some really messed-up stuff happening.

Coming soon to a blog near you...

However, I have promised to participate in the brilliant and charming Self-Styled Siren's For the Love of Film Noir blog-a-thon (link to donate to the restoration of a great noir film here).

I'm choosing between one of two films. Haven't quite decided which to post. Hint: one involves three actors named Robert and anti-semitism, the other involves a Nazi anti-hero.